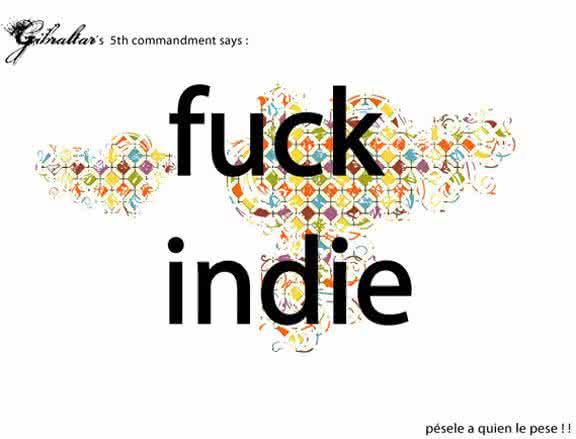 But I’m losing my edge to better-looking people with better ideas and more talent.
And they’re actually really, really nice.

Been relating a whole lot of James Murphy lately. I’ve been feeling a lot more comfortable just diving back into my own collection of music, not listening to much new stuff (other than local bands). I’ve felt the wave of new music completely topple over me. I used to feel ahead of the curve, like I knew things that were cool and awesome before they became awesome. Now I feel like all the things that I think are awesome have been and gone in an indie sense, chewed up and spat out again by a generation that I understand very little about, or care to relate with in any way.

This is a symptom of getting older, I realize that. I’m turning into what I hated as a teenager, a bitter and twisted old music cynic. But I miss that ‘edge’. About the newest, most ‘indie’ (whatever the fuck that means, seriously, fuck that fucking non-descriptive buzz word in its self-important ass) thing that I can sink my teeth into lately is some Arcade Fire, Animal Collective and Health.

Is this how it all plays out though? That we reach a time where we individually get to a stalemate with modern music, disappear into the depths of our own collections and live there, spitting vitriol now and again without ever being able to crack the surface of what’s real and honest about the music? I want to ‘get’ new music, but none of it grabs me in any way, shaoe or form. In fact most of it pisses me right off. Meticulously styled haircuts, neon-bright clothing, spacey-face paint… I’m so of the opinion that this decade has been about nothing but re-treading old ground, the decade of reunions and synth-revival. The fact that the best, most standout albums have all been from bands that started out the decade being awesome already (Radiohead, Sigur Ros, Jay-Z) makes we worry about the future of music. There just seems to be a mess of music these days, no pioneering genre, no defining artists that have sprung forth and taken music by the scruff of the neck and said ‘HEY! FUCK YOU! WE ROCK, FUCK OFF!’. Punk has descended to a DIY culture so up its own ass with morals and stigmas that it feels awkward talking to anyone about it. I reside in some of the skramz (the new buzz term for DIY punk) culture here in Melbourne and although it is filled with more genuine, honest musicians than I see anywhere else, they’re all so stuck on not being ‘sell-outs’ and all that other baggage that comes with trying to ‘keep it real’ in a moral sense that bands never last more than a year and see any form of mass attention as a negative thing.

This is a fairly shallow viewpoint, all stemming from a frustration with not being ‘hip’ and ‘cool’ with the ‘indie kids’. Then again I never was. In any way. James Murphy just gives me some hope that maybe there are other artists out there realizing a similar thing to me. Indie is now a commercial entity and until it falls by the wayside, we may not see any great originality in popular music. The ‘electro’ scene as I see it now is so incredibly derivative and marketed, industry seems so able and willing to package this shite together and thrust it on teenagers until they gag on the music’s own self-importance.

I’m worried. And confused. If you need me, I’ll be head deep in my own tunes.